Few evidences suggest that moderate consumption of red wine can help people to live longer. Such amount of controlled intake can even protect few cancers as well enhances the overall mental health. Studies further state that the heart is also protected by taking a moderate amount of red wine. As per history wine was used to counter few diseases. It was also believed that monks who have consumed wines moderately had lived longer than the others who have not all tasted wines.
Scientific findings have indicated such occurrences could be true as well. Knowing all these trends, people of yesteryears have invented many Wine storing methods in their homes as well as in other medical clinics. This article is primarily written to educate the readers about the benefits of red wines in enhancing few health conditions.

Interestingly, the definition of ‘moderate drinking’ is very vague, and hence it can be interrupted in many ways. What is ‘moderate’ for one person need not be ‘adequate’ for another person. Hence this term seems to be highly subjective. Still, medical experts say that benefits can be applied only to moderate consumption. According to few guidelines, moderate drinking is defined as One drink per day for women folks and two drinks for men folks. This thumb rule applies to the adults who have attained a legal drinking age which varies in many countries.

Red wine which contains higher levels of resveratrol is said to offer health benefits than the other types of red wine. As per experts berries and grapes are known to be the right source of resveratrol. Hence eating them offer better health benefits than consuming red wine itself. This ingredient helps to improve the health of the heart and even prevents few types of vision loss. When it comes to the habit of drinking wine, red wine that contains higher levels of resveratrol is recommended. This unique compound is produced by few plants to fight bacteria and fungi. 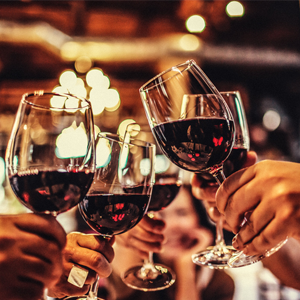 Scientists have also found that this compound prevents people from UV radiations. Besides the above-said benefits, the red wine enhances the levels of Omega 3 Fatty acids which is believed to prevent heart diseases. Findings have shown that blood levels of omega 3 fatty acids were high on the people who had moderate drinking practice.

To summarize the information shared in the above write up, one needs to be aware of the fact that consumption of red wine offers some health benefits, provided it is taken at a moderate level as prescribed by the medical experts. There is no doubt drinking excess wine, or in fact, any type of alcohol can surely increase the risk of many health and mental disorders such as depression, addiction, stroke, hypertension, pancreatitis and many more. However, countries like the UK and other Asian countries have cautioned people with a warning that there is no safe level when it comes to consuming alcohol. In fact, these nations advocate people with a clear concept of maintaining good health by saying: ‘eat less exercise more.’